Social Media is a form of online media that promote participation, openness, conversation, community and connectedness (Mayfield, 2008). A good example is Facebook which is the most popular social networking technology in Australia (Cowling, 2012). Facebook currently corners the social networking market and has also gained popularity as a marketing and client interaction tool by libraries (Jacobsen, 2011, p.79). Through Facebook organisations can promote themselves via posts, photos and sharing videos, they can interact with clients in a social space and, due to the popularity of Facebook, potentially enhance their online presence significantly (Myers, 2012). But how does an organisation ensure they make the impact they want with their target market. Marketing strategies are produced for all other areas of business and it is important that they be developed for social media also.

Brown (2009) posits some important questions to bear in mind when considering a strategy for marketing social networking technologies for an organisation, these include, but should not be limited to;

This last question provokes deeper thought on whether there are sites that will not require constant upkeep, for example something like Pinterest could be set up initially and only reviewed once every few months. It is important to note that one marketing strategy will not suit all forms of social media as it is likely the organisation will be using them for different purposes. Brown’s questions should be considered for each individual social media platform used by the organisation.

When creating a marketing strategy another vital component is knowing your target market. There is no point to answering the questions above if the market isn’t going to use what you are marketing. Bernoff & Li introduced ‘Social Technographics’ (Bernoff, 2012) they provided profiles based on the social technology behaviour of the market. The profile takes us from “inactives” who never use social media at all through to “creators” who record their own podcasts, maintain their own blog, and tweet their day away. 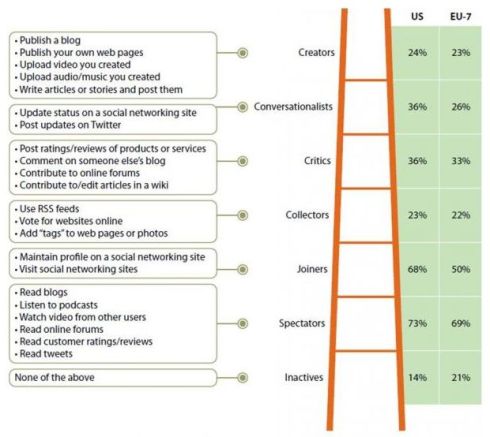 The profiles are fascinating, but then I questioned it. How could we be ensured that this related to the majority of University Students in Australia? The answer is relatively simple if you want it to be. Academics have referred to people born after 1993 as the ‘Google Generation’ (Rowlands, et al., 2008, p.290), this generation are now entering as Undergraduates. Therefore if there is not enough time or budget to do further research it would be reasonable to assume that the Google generation would fit into the profiles the ladder puts forth.

Bernoff, J. (2012). Social technographics: Conversationalists get onto the ladder. Retrieved from http://forrester.typepad.com/groundswell/2010/01/conversationalists-get-onto-the-ladder.html  on 15 September, 2012.

Mayfield, A. (2008, August 1). What is social media? Retrieved from iCrossing: http://www.icrossing.co.uk/fileadmin/uploads/eBooks/What_is_Social_Media_iCrossing_ebook.pdf on 15 September, 2012.

I wear many hats; Librarian, Mum, Wife, Sister, Daughter Friend, Health and Knowledge Seeker. Here is where I explore the many aspects of me and try new things on my journey. END_OF_DOCUMENT_TOKEN_TO_BE_REPLACED
This entry was posted on Thursday, September 20th, 2012 at 10:46 am and tagged with INF206, librarian, Librarians, Libraries, library, Library 2.0, Social networking, Uni, Web 2.0 and posted in INF206, Library 2.0, Library Life, Technology, Uni, Web 2.0. You can follow any responses to this entry through the RSS 2.0 feed.
« Second Life
The challenge of finding authentic information in a socially networked world »

2 responses to “Building a marketing strategy for Social Media”