Some different books this month including one I was quite surprised to like.

This was an oops, I didn’t realise it was number three until I got it home… damn fine print 🙂 Luckily this series is one of those that does not have to be read sequentially so we got along fine. I found the characters interesting and the story overall was quite good. I liked that the book was different from your typical mystery and there were character/economic points that I felt really fit with real life situations, for example the main character April has to live in her fathers restored barn with his partners parents because she does historical stamping for restoration projects for a living and there is not much call for that so she has no money – so there are those kind of side stories that make the characters more “real” and relatable which is great. I am definitely considering going back to read the other two – although I am hoping the villain is better hidden because I figured out who it was really quickly and everything after that just confirmed my thoughts until the big reveal and I was kind of sitting there going, ‘oh come one April, you are not this stupid!’

This book held surprise for me, here I was thinking I was getting a paranormal suspense novel with a female protagonist (Sarah Weston) who is a music student working a summer at Prague Castle Cataloguing Beethoven’s manuscripts (hello! I am a Librarian and a muso – like that wasn’t going to catch my attention haha). What I wasn’t expecting was a sexual element – which at first was really strange and to be honest whilst I now understand why she had a high libido I am not entirely sure it needed to be talked about so much, but I suppose danger, magic and sex kind of go hand in hand. Once the sexual element came in I really wasn’t expecting to like the book, I admit… I judged. I figured it was going to be literary porn masked as a serious novel, but I was pleasantly surprised and indeed rather swept away with the twists and turns in the book. It hooked me and I really, really enjoyed it – it certainly was not porn and as you got into the story you came to understand what that first shock had been about. There is a book two and I am hot on the trail to finding it 🙂 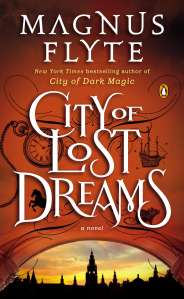 I found book two! 🙂 Hooray! I do hate when you start reading a series and have to wait forever for the next book *cough cough* George R. R. Martin *cough*. Slight spoilers, but not really.

This book did have a different feel from the first one, the story was split between Prague and Venice so whilst the main protagonist was still Sarah you spent more time than in the previous book seeing the story unfold from others points of view. I really enjoyed these books for their uniqueness, it was a really different concept that not only challenged the way you looked at the world, but also in the end looked at how people choose to spend their lives. Two different immortals; one who spent their life trying to achieve and brought science and medicine forward in leaps and bounds and one who spent their time frivolously searching for a way to end it all – don’t worry they are not Vampires 🙂 Just humans.

This one I just grabbed from Overdrive because I had nothing to read and it sounded interesting and had a pretty cover. Turns out I was right with my earlier assumption… danger and magic mean that at some point or other in a book you’re going to end up with sex… why is that? Whilst the whole book was not a sexual tone the couple of times it was it was kind of a shock.

I found the story okay, you have no clue who is bad and who isn’t for the entire book. The female protagonist kind of grows on you, but she spends a lot of the book insisting she is not a bimbo, but whining about her looks and nail polish… I get the impression that the fact is at the beginning she WAS a shallow bimbo, but she is supposed to be slowly changing into someone of depth due to what is happening around her. I have no clue what is going on with the character of Barrons, if I was living in that place I would be spending my days (when he is not around) going through his house from top to bottom searching for ways to protect myself from him – he seems like a psycho and throws Mac around – it’s very strange!!!

One thing that really annoyed me was that I didn’t feel like the ending was an ending, I thought it was the end of the chapter, turned the page and there was the glossary… umm wtf? I google the title… dammit it is a series and nowhere has the second book, this annoyed me because the book had no kind of conclusion, seriously… the narration is done from some point in the future as though she is telling the story of how she got there… naturally I figured the end of the book would at least get me to the point the narrator was up to, but no… nothing. It was really weird, but it also drew you in so I kind of want to read the others, although admittedly that could be my love of closure 🙂 Don’t even get me started on how Mac magically transformed into Buffy TVS after one lesson on where to stick the pointy end… just… don’t.

And so we go into July… so many books… so little time. What are you reading at the moment? I am open to suggestions 🙂

I wear many hats; Librarian, Mum, Wife, Sister, Daughter Friend, Health and Knowledge Seeker. Here is where I explore the many aspects of me and try new things on my journey. END_OF_DOCUMENT_TOKEN_TO_BE_REPLACED
This entry was posted on Tuesday, July 1st, 2014 at 11:59 am and tagged with 52 Books in 52 Weeks, 52B52W, Books, City of Dark Magic, City of Lost Dreams, Darkfever, Events, False Impressions, hobby, Karen Marie Moning, Libraries, library, Magnus Flyte, Reading, Stamping Sisters mystery, Terri Thayer and posted in 52 Books in 52 Weeks, Books, Grrrrr!!!!!, Lists, Love to read, Movies, Reviews, That's just how I roll. You can follow any responses to this entry through the RSS 2.0 feed.
« Bum vs. Bottom
Sir Nicholas Winton – the true Saint Nick! »