WARNING: There are some spoilers ahead. Short non-spoiler version: This was a good follow on from the other novels. Found some surprises in here. There were things I liked and didn’t like. Was interested very much in how she developed Dani’s character whilst hating it at the same time. 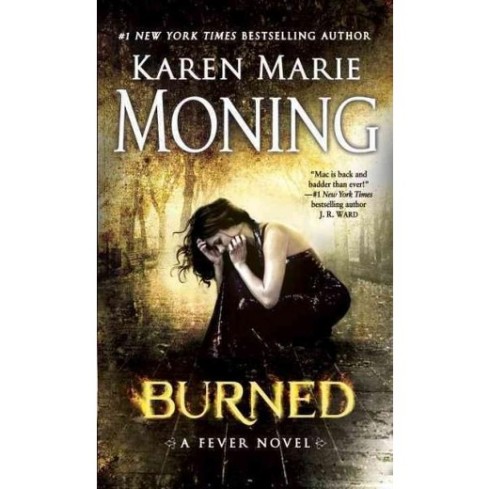 This book seems to be receiving some serious flack in some of the reviews I have read. I was pretty happy in general with this book. I didn’t tear through it as much as the other books in the series for some reason, but it certainly wasn’t the travesty that people are making it out to be. There were parts of it I loved and parts not so much, but the likes far outweighed the dislikes.

In general this was a good installment in the series and I am looking forward to the next one. I still LOVE the world building in this series. There were a couple of completely new areas that we visited with the characters and I could completely construct a visual in my head thanks to Moning’s world building. Her descriptions of the Crimson Hag are just spot on and at times made me cringe, they could possibly give someone nightmares haha.

The characters interacted well and I still love the arguing between groups and the banter that goes on. We saw more of some characters that have so far been mostly in the background which was great and I liked the development of Lor’s character very much. I also appreciated getting to know more about the Nine and finding out about some of Ryodan’s much protected secrets.

-WARNING – BIG SPOILER – SKIP THIS PART IF YOU WANT –

I loved the character of Dani from the other books, I was a bit put off with the changes to her character. I knew something was coming with her because it felt like this was the way we were going with some kind of hidden personality. I was just disappointed when Dani disappeared right at the beginning of the book and I guess her character was so full of life that I really felt the loss in the group. Especially when she was replaced with this next gen Dani/Amazon warrior with the personality of a paper bag. I struggle with this because I love Dani, but at the same time it was such a clever development.

I’m glad I finally got to read this book. It has been on my TBR pile for some time (like you know… since it was published haha). Looking forward to getting hold of the next one.

I wear many hats; Librarian, Mum, Wife, Sister, Daughter Friend, Health and Knowledge Seeker. Here is where I explore the many aspects of me and try new things on my journey. END_OF_DOCUMENT_TOKEN_TO_BE_REPLACED
This entry was posted on Wednesday, August 2nd, 2017 at 5:13 pm and tagged with 52 Books in 52 Weeks, 52B52W, Burned, Fever series, Karen Marie Moning and posted in 52 Books in 52 Weeks, 52B52W, Books, Reviews. You can follow any responses to this entry through the RSS 2.0 feed.
« The Princess Diarist
Rescue Kittens »