Things that are making me smile

I went for a walk to get a coffee today and our local coffee shop had this up. It made me smile (and want a t-shirt) so I asked the barista if I could take a picture of the sign. He seemed excited that people wanted to share it so I thought I would.

Seriously though… this needs to be on coffee cups and t-shirts… ooh and totes. You just know as a librarian, book lover and someone who is trying to reduce their waste that I love a good tote 🙂

Something else that made me happy recently is that my cover for my new phone arrived. At the beginning of the year I got a new Samsung S7 in rose gold. My contract for my old phone was a few months out of date so it was really time. I always have my phones in wrap round cases – I think it is what makes them last so long. I found a cover I LOVED online that I wanted so much that I literally waited a MONTH for it to arrive from Hong Kong. It only cost $12 though so BONUS! 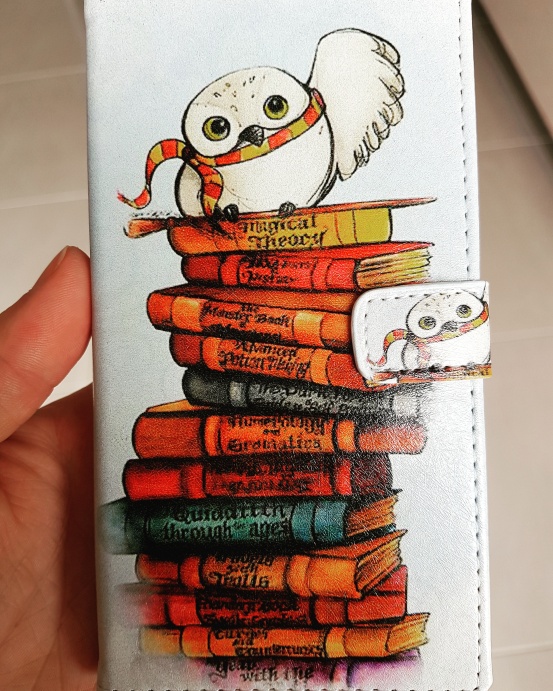 Honestly, this looks even better in person than I thought it would. Often (as with my last phone case), when the item arrives the colour, quality or image are not as good as you had anticipated. With this product the colour is great, the quality of the materials and stitching is good. The names of some of the texts are a teeny bit hard to read sometimes, but if you are a Harry Potter fan you will be able to work out what they are 🙂

I was super pleased with this, it still makes me happy. The owl is SO cute. I really have a thing for owls, always have. My favourite are Tawny Owls, they are just so little and cute, Boobook Owls are also super adorable and have incredibly expressive faces… plus they have the word ‘book’ in their name 🙂  I don’t think it is overly fair to keep such beautiful animals as pets, but I would love to have them hanging around my place. This little sketch of Hedwig is probably the sweetest I have seen to be honest.

What has been making you smile lately?

So during lunch today I was browsing the ladies section on the Best & Less website and came across something strange. Apparently Best & Less staff forgot their coffee this morning and are having some issues with their tops and bottoms.

The yellow thing pictured below (image taken from your website) is not a pair of denim jeggings. It is in fact a tank top. Thought you should know.

Have a great day,

Just a quick something to hopefully make you smile 🙂 Have a great day!

What’s the best marketing fail you have seen? 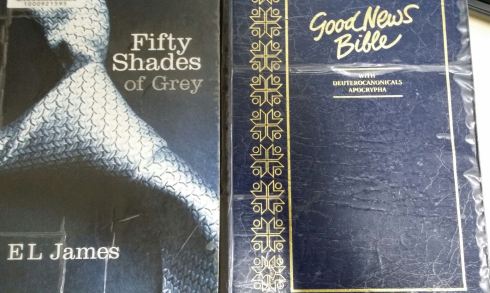 I assume the Bible is the chaser for 50 Shades so he can get over his guilt??? This amused us endlessly during our 2 hour desk shift. It is possibly the best return combination I have ever seen. 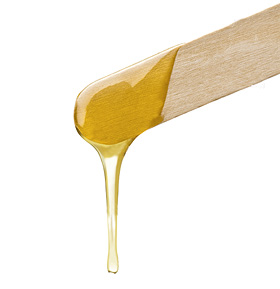 They say “beauty is pain” – I don’t know who started that, I even Googled it and could not figure it out, suffice to say in a lot of cases it is true. Today however I am talking about a specific kind of pain… I am talking about the dreaded waxing… the brazilian!

Now, I don’t know about you, but I like to get all my waxing/beautician stuff over in one go. I go in once every 5 weeks and do the eyebrows, bikini line etc. I have thought about permanent hair removal, but that is about as far as I have got with that… thought about it LOL.

Recently I went on my regular visit to the beautician I have been seeing for many, many years. I even followed her when she moved a few suburbs away, she is good and she is reasonably priced. So this day I went and she was on her own because the other lady was on a half day, should be no issue right? So here I am in a tank top and a g-string on this table legs all over the place and she has got her hot wax and is putting it in the kind of places where you really want someone giving it 100% focus as a little stray wax could put you in a world of pain and the phone would not stop ringing. Seriously what would normally take a maximum of 10 minutes took us 30. It was insane, she kept having to leave the room mid wax and I would lay there listening to her conversation on the phone or hearing her talking to the random that had walked in until she came back.

Eventually she gave up and brought the cordless with her and then I had the awesome experience of having her waxing between my legs whilst fielding phone calls, that was seriously bizarre, I mean I have heard of multi-tasking, but that is not something I want you to do whilst you are applying hot wax to my lady parts!

Then someone came in the front door again so she had to go out, I happened to look to the side and see the mirror they have there so you can check your wax before going out and paying in case there is anything you want them to fix and had to laugh at how ludicrous I looked. One leg up and out and one to the side, at some stage of mid wax (I wasn’t entirely sure where we were at so I didn’t want to put my legs together in case things then got stuck – Oh my god can you even imagine that!), pretty much bare enough to cause significant embarrassment if someone walked in, listening in to a conversation I shouldn’t have been dealing with before my morning coffee (apparently her bf was going to ditch her if she didn’t bald her beaver – I felt like screaming at her to dump him if he doesn’t return the favour and bald his balls!!) and apparently a bit of the cotton she had used had not made it to the bin and was stuck to my knee. I had a good giggle at myself and then realised how much we really bare to our beauticians, my beautician has seen more of my body than my doctor, she knows more about our house dramas than most of my friends, she knows and remembers the name of my Hubby and our nieces and nephews – some of my colleagues don’t even know I have any.

Isn’t that an incredible amount of trust? Not that I am saying it is a bad thing, I just had never thought about it before and was quite amazed to be honest.

Don’t worry, she didn’t leave me stranded, she came back and finished me up and apologised profusely throughout the entire thing. Funnily enough (even with Clomid going nuts) I wasn’t upset about it, because I knew that they had recently moved areas and that they were in a small collection of shops rather than a mall now and she was very ill with fluid on her lungs for a few weeks so she really needs the business. Then I realised I knew her well too. How interesting that both of us share so much of our lives with someone we see once every five weeks.

Sometimes you see a book title and you do a double take, no, you think to yourself, it couldn’t have said that. So you look again, you look at the spine, you take the book off the shelf and check the front cover and maybe even the title page to ensure that you are not hallucinating. Yup, that book exists and even better… it is available for loan at your place of work.

Yesterday I came across one of these gems. I was innocently tidying the shelves when it’s title jumped out and slapped me in the eyeballs.

I am not sure what disturbs me more; that my pee has a social life and apparently a lot of baggage it is bringing to our relationship or the fact that someone wrote an biography about its escapades.

What am I supposed to do when someone asks my pee for an autograph?

Umm just for the record (yes you can quote me), my pee does not get (or go) “everywhere”. Glad we cleared that up.

This discovery sent me down the rabbit hole of the web looking for the strangest and craziest book names. There are tonnes. Some are funny, some scary, some are disgusting. Here is a sample of what was found:

This was my personal favourite:

I don’t understand many things about this book. But my biggest questions are… why is the hospital outside? And how does the dog know Jack and Jill?

“What shat that?: A pocketguide to Poop Identity”
“Am I ready for chest hair?” – I didn’t realise people got a choice in this
“Eating children: Population control and the food crisis”
“Eating people is wrong” – apparently Hannibal never got given this tome

I’m concerned that this book needed to be created

“Everything I want to do is illegal”
“Zombie Racoons & Killer Bunnies” – They’re real ya’all… real as drop bears!
“The great Singapore penis panic: and the Future of American Mass Hysteria” – WTF? What does this title even mean? Is it about Singapore? Or America? Is this real life?
“Natural bust enlargement with total mind power: How to use the other 90% of your mind to increase the size of your breasts” – well that seems legit.

Then there is this jewel:

How and more importantly WHY is this a best selling book? I am not surprised it was recorded by the author… alone in a recording booth? Apparently he is into talking to himself so whatevs 🙂

Have you got any interesting book titles? Which one of the above is your favourite?