# SPOILER WARNING!!! I know I don’t normally do this, but in this case I will discuss much of the plot in both the book and movie ‘Little Women’.

This is a breakthrough 52 Books in 52 Weeks post and will count as number 14. I wanted to do a special post on this book and its movie adaption, but it will still count towards my count 🙂

So those that have been following me for awhile would know well my love of the book Little Women. In fact it is one of my favourite books and definitely one of my favourite movie adaptions. I realised that I had not read it in many years and so when I saw it at work I grabbed it and once again lost myself in this beautful story. It is one of the few books I have cried in and I am not ashamed to admit that I still welled up, not so much in the sad parts, moreso in the extremely joyous parts like the return of their father after he fell ill in the war. Interestingly I never noticed before that in the book they say he fell ill, but I am pretty sure that in the movie he was injured – doesn’t really matter. The coming home was beautiful and joyous and I welled up… I totally blame the pre-baby pills hahaha.

I have pondered for awhile about doing some book vs. movie posts and so I guess this will become my first 🙂 First of all as I have stated previously I loved both the book and the movie (1994 version), there was a lot cut out of the book (let’s face it, it is pretty long) and mushed together in the movie, but I think it works. So let’s talk about differences.

I think the thing that made the movie adaption so great for me was that the cast was just wonderful, seriously that casting director needed a raise. Not only were they great in their own roles, but their interactions with other members of the cast were poignant, purposeful and moving. 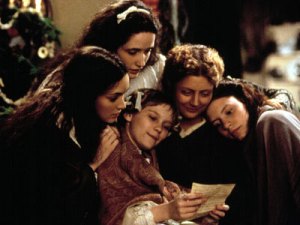 Don’t expect me to always provide such glowing reviews, but every now and then you might get one. Obviously this review is completely biased by my childhood love of this movie which undoubtedly has lots to do with the fact I grew up with two rough and tumble brothers and desperately wanted a sister hahaha.

What is your fave book to film adaptation?