Remember how a few posts back I talked about my New Year’s Resolutions and one of them was about accepting home truths? Well here is another for the pile 🙂

It is what I call ‘The Squirrel Effect’. I am a pretty creative person, I love creating things, I love trying new things so am always starting new projects and buying ingredients to try new recipes. The problem I have come to realise is that sometimes I lose interest… or my interest shifts to something new… AKA SQUIRREL! [if you don’t get the reference go and watch Disney’s Up!]

I decided to write this post after reading “Good boss, Bad boss” on LauGraEva’s blog, I remember that I first discovered this about myself when I was my own boss working at home. I was younger and had the misconception that I would have so much more time because I was working from home; I was wowed by the fact that in the middle of winter I could wear my flannel PJs and UG Boots to the office 🙂 Needless to say I very quickly realised that watching Firefly whilst answering work emails was not a good plan when I replied to a client informing them that everything was “Shiny”.

The same thing happened when I was unemployed for two months last year, I thought I would have so much time and I would be able to keep up on everything in the house and get a bunch of projects done that I had been unable to start… pfft… didn’t happen. I did get some vegies planted and caught up on washing, I also cleared out the closest and sent a bunch of stuff off to charity, but there was so much I didn’t get close to touching which was seriously disappointing! I even used to make deals with myself like: ‘okay, we are putting a wash on now, you can watch one episode of Big Bang Theory and then you have to go and put it out’, but then invariably I would try and find things to do inside like the project I started creating Christmas decorations by up-cycling books… that was way fun… and messy and kind of took over my coffee table for a week before Hubby got the royal poos 🙂

At the moment I have 2 major projects that I need to get too, one is that I found a vintage bird cage by the side of the road and I have the idea of somehow turning it into a succulent planter for my mates for their combined 30th bday – they both like up-cycle/vintage so I think they will love it. Then Hubby had to go into hospital etc. and long story short their birthday has come and gone and I haven’t finished it 😦 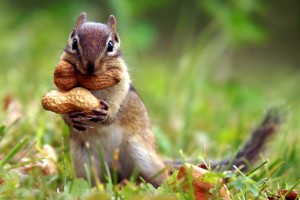 it’s because of the Squirrels…

I also have a project I desperately have to start and finish before October for my Best-Friend’s wedding and…. I was about to tell you all about it, but then I have just realised that I think she reads my blog from time to time and so I cannot tell you about it, but it is pretty awesome. I have never done anything like it before and actually have no idea whether I am able to do it, in theory [AKA according to my hella awesome research] it will work, but in practice… who knows.